And welcome to December. It strikes me forcibly that this is the second COVID December.  Praying it will be the last.

Mike Morrice and I had another very eventful week in parliament.  It is great working with him. We are finding our groove – if that expression is not too outdated.  Learning the ropes in Parliament is not intuitive, so I am really glad I could be physically at his elbow for the first two weeks.

Opportunities need to be grasped. For example, on Tuesday, Justin Trudeau gave a completely unexpected speech in reply to the Speech from the Throne. I was able to say “OK, Mike, the PM is just standing, so he is allowed a 20 minute speech and 10 minutes for questions means we have a shot at asking him a question. Do you want to take it?”  And with no time to think, Mike said “yes!” and put together a great question on one of his key concerns, the cost of housing in his riding; asking the PM if the election promise of a home vacancy tax was still a commitment since it was missing in the speech from the throne. https://mobile.twitter.com/morricemike/with_replies

We also had a fabulous time working with our new interim leader Amita Kuttner on their first Parliamentary visit as leader. On Wednesday, Amita held a press conference to introduce themselves to the Ottawa press gallery and invited Mike and me to join them, and to speak about our priorities.  It was wonderful to be asked to speak alongside our interim leader!

We had a glorious moment when, again, unexpectedly, N.B. Conservative Rob Moore rose and put forward a long and complicated motion asking for unanimous consent to move the bill banning conversion therapy, the same bill we had passed in the 43rd parliament, through Second Reading, Committee, Report Stage and Third Reading and send it to the Senate – all at one go!   We held our breath as the Speaker asked if all agreed, and then again to be sure that no one said “no.”   The cheering and joy that filled the room was so rare and unifying. I was crying when I hobbled on my cane across the floor to thank Rob Moore, high-fiving Randall Garrison along the way. A great moment!

That night, Amita, Mike and I participated in a beautiful celebration of Chanukah organized by my dear friend, Anthony Housefather (Liberal, Montreal riding of Mount Royal).  It was mostly on Zoom, but Anthony asked me to join him in his office for an in-person component – and let me bring along Mike and Amita.  Justin Trudeau was linked in from his office and so on for Erin O’Toole and Jagmeet Singh. It was so nice to be able to be there in person sharing the moment with a lot of friends I had not seen for so long – including former Justice minister Irwin Cotler and Supreme Court Judge Michael Moldaver.  Anthony made sure our new leader was publicly recognized and introduced, as well as joining me in lighting a candle. The event included a Zoom link to 500 families across Canada who were able to join the Prime Minister and all opposition leaders in lighting the Menorah candles for the fourth night of Chanukah.  It was really moving. It capped off a lovely day.

Well, not quite “capped off” as I had to return to the House for a debate on softwood lumber that ran until 11:30 pm.  I think I raised some worthwhile points in my 5 minutes!  https://www.youtube.com/watch?v=IhoCtbk6Onk

In other news, our new Environment and Climate Change Minister Steven Guilbeault made two recent climate announcements – one good, one predictable and not so good.

First the good one. Steven Guilbeault has turned down a request from the Higgs government of New Brunswick to be allowed to continue to burn coal in the Belledune power plant after 2030.  Guilbeault had little choice given Canada’s claim to global leadership as a founding partner in the Powering Past Coal Coalition.  But burning coal until 2030 is bad enough. To allow provinces loopholes to continue to burn coal past 2030 would be outrageous. Still, I was relieved and pleased with his decision.   https://www.cbc.ca/news/canada/new-brunswick/belledune-coal-plant-ottawa-1.6262023

The poor decision was to avail himself of the three month extension under the so-called Canadian Net-Zero Emissions Accountability Act (formerly C-12).  By law, the first climate plan with details was due within six months of the act’s becoming law. That deadline would have been December 29. Guilbeault has extended it to March 29.  But he did say that would give time for consultation. Please let him know what you think!

No details, but here is the government press release.

It was another unexpected opportunity to be able to debate the minster, genuinely an old friend, in parliament in what we colloquially call “Late Show” – more formally “Adjournment Proceedings.”  Every time I have done Late Show – for over ten years! – to pursue a non-answer from a minister in Question Period, it is the parliamentary secretary who has to stay after hours for a ten-minute debate. But this Tuesday, being the first Late Show of the new parliament, the parliamentary secretaries had not yet been appointed. My question had been to the Minister of Natural Resources about the increased subsidies to oil and gas through the so-called “Emissions Reduction Fund.”  Jonathan Wilkinson should have turned up, but Steven Guilbeault got stuck with debating me instead.  Here is how it went:  https://www.youtube.com/watch?v=Hx1-jx3BaIM

Happy to be home on Saturna this Sunday morning and not heading to Ottawa this week. The House approved going back to hybrid format, so I will be fighting the good fight on Zoom once again.  My next knee replacement is a week Monday, so no flying for me for a long time!  Lucky thing I only have two knees!  That surgery is brutal, but the results will be great.

The PS below is long because I did not want to cut one word of the promo for an event featuring our brilliant president Lorraine Rekmans, a champion of the work against nuclear energy and uranium mining.

I do want to ask, very personally, for supporters and subscribers to this little letter to join or re-join the Green Party right now and to please send donations.  Strangely, some in the media want to keep hyping the old news – that we have some financial woes.  It was news to me that we were thinking of closing the office – and I checked. It would be news to everyone. It is not the case.  Apparently, those who wanted to spin stories to hurt the party have not gone away. The best way to turn the page on what was a very difficult and painful year is to cheer on Lorraine Rekmans and Amita Kuttner and the team committed to rebuilding the Greens.  Please make a donation today at: https://www.greenparty.ca/en/civicrm/contribute/transact?id=1&source=NC.W.MABU

Nothing will shut down the nay-sayers like a great fourth quarter fundraising result!

Have a great week. Be safe and well.

Panel – Friday December 10 – by ZOOM: Uranium and nuclear energy in New Brunswick and beyond

Register at this link for the zoom event:
https://unbvirtualclasses.zoom.us/meeting/register/tZMrcuqgqjkjH9XywrX0SIMCOR8YnFsAXkb4 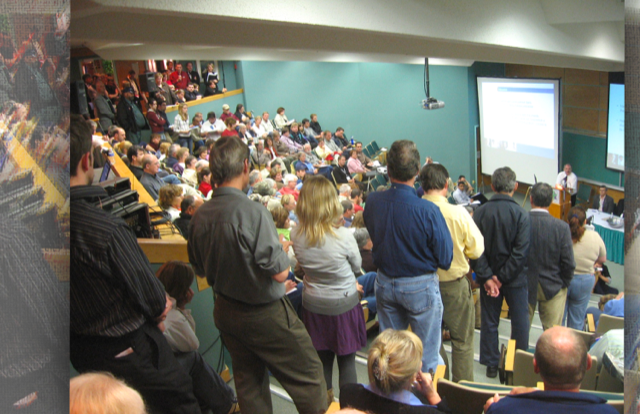 Photo above: Hundreds gathered to voice their opposition to uranium exploration and mining in New Brunswick to government officials at the Hugh John Forestry Complex in Fredericton in 2008. Photo from the Campaign for a Nuclear Free New Brunswick.

Panel hosts: RAVEN (Rural Action and Voices for the Environment) project at the University of New Brunswick, with co-hosts the Environment and Society program at St. Thomas University, Prevent Cancer Now, the NB Media Co-op, and the Coalition for Responsible Energy Development in New Brunswick (CRED-NB).

Background: Canada has 19 operational nuclear power reactors – one in New Brunswick at Point Lepreau on the Bay of Fundy and 18 in Ontario on two of the Great Lakes: Ontario and Huron. All nuclear power reactors require uranium, a radioactive heavy metal, or plutonium, a uranium derivative, as fuel. The Government of New Brunswick and the federal government are supporting the development of new nuclear reactors for Point Lepreau. These proposed reactors will also require uranium or plutonium as fuel.

Key questions for the panel: Why is uranium required to operate nuclear power reactors? How is plutonium created from uranium? What are some of the health and environmental impacts of uranium mining? What are the impacts on Indigenous communities? How are uranium and plutonium related to nuclear weapons? Why should we be concerned about all this in New Brunswick?

Moderator Susan O’Donnell is an adjunct professor at both the University of New Brunswick and St. Thomas University.

Gordon Edwards will discuss the health and environmental impacts of uranium mining, and the links with the nuclear industry in New Brunswick, Canada and globally, as well as with nuclear weapons. Gordon is president of the Canadian Coalition for Nuclear Responsibility.

Lorraine Rekmans will discuss the impacts uranium mining has on Treaty Rights and Indigenous health from the experiences of Serpent River Nation members at Elliot Lake, Ontario. Lorraine is a member of Serpent River First Nation and president of the Green Party of Canada.

Tracy Glynn will discuss the 2008 campaign in New Brunswick that mobilized to raise community awareness of the dangers of uranium exploration and mining. Tracy, an assistant professor at St. Thomas University in the Environment and Society Program, is on the board of Mining Watch Canada.

The map below of exploratory uranium claims in New Brunswick was developed by Lawrence Wuest. Read his article HERE, published in January 2020 in the NB Media Co-op, Hyping the illusion: Will a uranium mine in New Brunswick be the next Higgs’ genie?

Learn more about Lorraine’s life-long experience as a reporter and survivor as an Indigenous woman surviving the effects of the nuclear industry here, in her interview with Metta Spencer on the show To Save The World. https://youtu.be/xBWDx6HXa2Y

Thank you for your continued solidarity in the Green political movement.