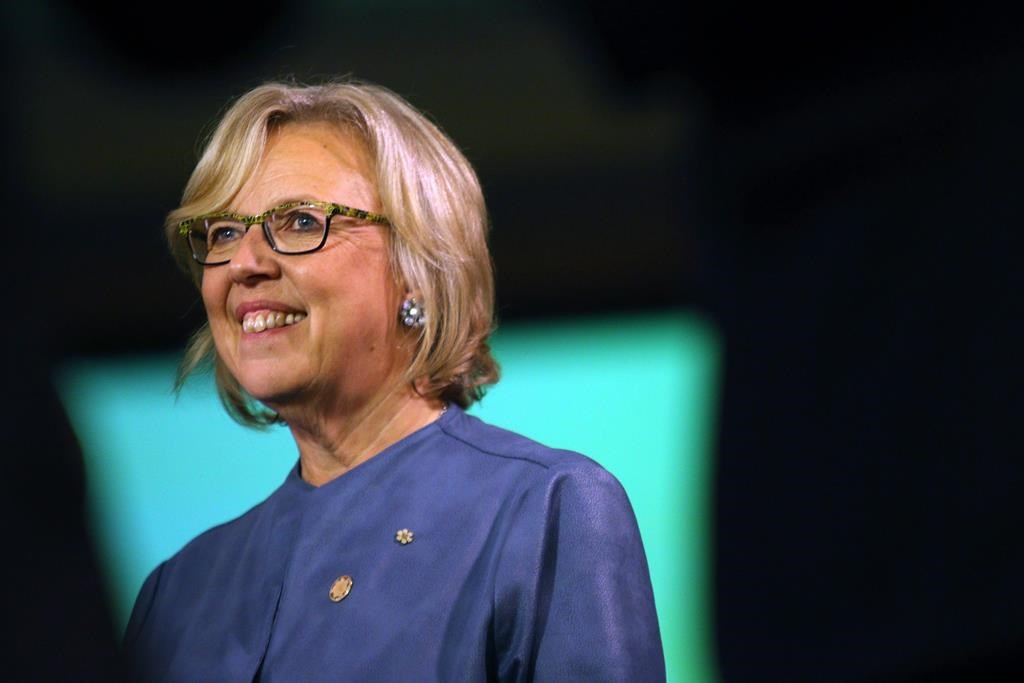 Saying oil is dead is not a prediction for Elizabeth May, it is simply reading the writing on the wall. File photo from The Canadian Press

It has been an interesting week. On the morning of May 6, I held a press conference in West Block before the weekly in-person session of Parliament opened. I spoke about how virtual Parliament is working, and Green recommendations to make it work better.

When we got to questions, the first one was CBC’s Julie Van Dusen. She asked about a possible bailout to Big Oil. And I explained that the evidence was coming in thick and fast that oil’s day was done. And she zeroed in on: “Are you saying oil is dead?”

“Yes,” I said, “oil is dead.” I went on, at length, about concerns for the people of Alberta. I stressed the need to invest in Alberta and to diversify its economy. Just the day before, the CFO of Royal Dutch Shell had told shareholders that the demand for oil “might never come back.” I didn’t think it should be a surprise that investing in the oilsands was not something our government should do.

Of course, it is something the Liberals promised never to do in the 2015 election campaign. It was something former prime minister Stephen Harper promised to stop in 2009 at the G20 summit in Cincinnati.

Still, the assumption from media seems to be that it is only a matter of time before the feds roll over and give Big Oil $20 billion. The Canadian Association of Petroleum Producers is so used to calling the shots that it had the gall to ask for huge levels of financial bailout, plus weakened environmental protections, and getting rid of Lobbying Act requirements.

Within hours, and then for days, I have been attacked as though I had declared war on Alberta and its citizens. No surprise really. Premier Jason Kenney attacked me as “divisive.” Heartlessly kicking Alberta when it was down. Gerry Butts tweeted that I was being “mean.” Numerous Conservative politicians, including one MP, said my goal was to “destroy Canada.” And I avert my eyes from the invective on social media.

I was not making a prediction. I was not expressing an opinion. I was reading the writing on the wall.

Reporters defending the oilpatch, such as CTV’s Molly Thomas on “Power Play,” said that the oil and gas sector is 11 per cent of Canada’s GDP. Amazing. The reality is that it is 5.6 per cent of GDP.

People claimed I was ignoring a workforce of 500,000. The workforce is large and important, but actually it is 169,000. And to the exaggerations, I must add that frequently repeated claim that the oil and gas sector results in around $8 billion annually in taxes. The accurate figure is around $2 billion (combined federal and provincial revenues). https://www.nrcan.gc.ca/science-data/data-analysis/energy-data-analysis/energy-facts/energy-and-economy/20062

So against an onslaught of oil and gas propaganda, I keep trying to get out the facts.

The International Energy Agency report this week was stunning. The only energy commodity not being pummelled in the pandemic is renewable energy. Sure, it would have done better if not for COVID-19, but the market forces are clearly moving away from fossil fuels. Global demand for coal, oil and gas is plummeting. And so are the prices for oil and gas. The only energy product in demand is renewable energy, which will grow 5 per cent in 2020 to produce 30 per cent of the world’s electricity by year end.

More writing on the wall came from a massive study released by the Oxford Review of Economic Policy. A team of economists, with lead authors Nobel Prize winning economist Joseph Stiglitz and the former Chancellor of the Exchequer Sir Nicholas Stern, interviewed more than 200 experts from central banks and economic policy and energy analysts from G20 countries. They took all the information they gathered, laid out against measurable indicators, to determine the strongest economic policy to avoid a deep post-pandemic depression. Their prescription for post-pandemic recovery is to invest in renewable energy and retrofitting buildings to maximize energy efficiency. Trying to support fossil fuels would be far less effective.

So maybe, oil is not dead. Maybe, like Farm Boy in The Princess Bride, it is only mostly dead. Maybe Miracle Max can save it.

But if we are in the business of working on miracles, let’s make them good ones: eliminate poverty, guarantee food security, ensure decent working conditions and fair wages for our front-line workers, re-localize our economy and rely on energy sources that won’t destroy our future.

We’re at a critical moment. It is time to read the writing on the wall.